Compelled into action by the George Floyd murder, Equal Justice Studios launches its mission of “Bringing Stories That Matter, To Life” with a powerful, signature soundtrack — “Enough” – a hip-hop track performed by rapper, Ethan Dangerwing, stage name,  The Vulture.

After watching the horrible murder of George Floyd, as an artist, writer, producer, lyricist, Jeff Mustard was compelled to express his thoughts, feelings, and outrage about a. what he saw, b. the national outrage,  and c. the support for change.

The two-part song, inspired by George Floyd’s death, expresses the pain, sorrow, injustice, and inequality in America today. It is also an in-the-face, full-on reflection of the country’s horrible truths – past and present.

How We Got Here:
Movement I

The song title is a wordplay/double entendre. In the first movement, about 300 words, consisting of 15 verses and one chorus, is written and produced to a fast tempo — 125 BPM, inspired mostly in the hip-hop/rap delivery style of “Hamilton.” This first part/movement of the Song, which is 2:20, is a history lesson of “slavery” – meaning – A. African American enslavement going back 400 years, B. coming to the newly forming nation, or rather, “being forced to come to the New World,” and C. Forced labor on plantations.

“Cotton the Crop, Brought us to this Land,

You Profit, Your Greed, Made Us Farm Hands…

Bent at the Waist, Never a Taste,

of the Profit, we Create, For Your Colony States..”

We made you rich,

We had no choice,

We had no voice,

We had no voice,

The Title: “How We Got Here”
A Little Historical Context

Not only IS the history lesson, BUT the wordplay/double entendre of the title reflects the systemic racism that has brought this country to a never-before-experienced cultural and social inflection point. So, “How We Got Here” means, and relates to, directly and sub-textually — a. historic slavery (and the horrors around it,) and b.societal racism in the country that exists since the founding of America through contemporary society.

Below are three 30-second sample tracks from the First Movement. The full song “Enough” can be purchased as part of our fundraising efforts:

CHECK OUT THE GEORGE FLOYD MUSIC VIDEO – PRODUCED IN TWO PARTS
PART 1, BELOW – “HOW WE GOT HERE” BELOW
PART 2, FURTHER DOWN THE PAGE.

The approx 450 words of this movement bring us to “this moment” in time, triggered by Mr. Floyd’s tragedy. This movement, produced at 80 BPM, maintains a steady, slower, but no less classic hip-hop rap beat style and delivery that allows the listener to absorb the lyrics and powerful message of the Song. Part II is 4:00 and consists of 16 verses and 6 choruses. Mostly, the “song” continues the “systemic racism” message and theme. Still, it accentuates the here and now in the face of the George Floyd murder invoking the ever-present racism message lurking beneath our society. It also reinforces the historical, social injustice, and inequality themes reflected in Movement I.

Three men on his back

they said it restraint

we know it was hate

Because of the tape

(for) the cops no escape“

No justice, no peace

It’s on the tape,

Below are three 30-second sample tracks from Movement II. The full song “Enough” can be purchased as part of our fundraising efforts

Very rapidly, Jeff Mustard’s song, “Enough,” has captured the attention of a lot of people, including a significant South Florida restaurateur, and prominent civil activist, who immediately saw the value of the message of the song and sought to direct a music video, which was covered by the media. Here is a CBS TV/WPEC News Clip coverage of the Music Video Production.Movement 1 of the song, titled “How We Got Here,” running time of the track, 3:13, was shot over two days on a 16 acres farm in West Lantana, “Sons and Daughters Farm and Winery,” not coincidentally, and remarkably, owned by the Jones Family.

Check Out Our Producer’s Video

Watch this short video where Writer/Producer/Lyricist, Jeff Mustard, Rapper, Ethan, The Vulture, and Rob Roa, Producer/Engineer discuss their thoughts and feelings about the George Floyd Murder, the death of Corey Jones, and the meaning and value of this powerful new song, “Enough.” This song represents the embodiment of the sentiments crystallizing this revolutionary period in our nation’s history – the recognition of inequality, social injustice and TIME and NEED for Change.

The Vulture lives in South Florida. He and his family are no strangers to the death of a loved one by police officers. His cousin, Corey Jones, a musician/ drummer, was needlessly shot and killed by a police officer in 2015.  The George Floyd murder hit home, dredging up painful wounds and horrible memories for Ethan. Ethan performs this song as a tribute not just for the Floyd family, but for his own cousin, Corey Jones.  To honor Corey Jones, we are setting up a fund to create a bronze/sculpture memorial that will be located in his home town of Delray Beach, Florida.

See our links below “Fundraising” and “The Jones Family.” Learn how you can contribute to the memorial statue cause, and also learn about the tragedy suffered by the Corey Jones family.
Fundraising
THE Jones Family
05

We’ve got interesting things to say. Whether it’s a comment on something in the news, something on our mind, or an update to any one of our exciting social justice projects, you’ll want to check out what we’re up to! Music Updates, Video Updates, Inside Peeks, and Behind-the-Scenes Clips, we’re working toward the implementation of significant social justice goals.

Writer – Producer – Rapper:
Get to know us. We’re good people with a great mission.

Ethan Dangerwing / The Vulture
(cousin to )

The creative engine and tireless force behind Equal Justice Studios [EJS], and the lyricist/producer of “Enough,” Jeff Mustard is driven by the powerful and painful occurrences, the ignored atrocities unfolding before our very eyes. A driving desire to produce and create “media projects” anchored in history and revealing buried truths, EJS will develop media and proprietary intellectual property intended to move the social justice needle, illuminating painful issues, with the goal of empowering change.

Signup For Our Newsletter

News for the Social Justice Activist.
Join the Fight! Change starts with you, now, today! 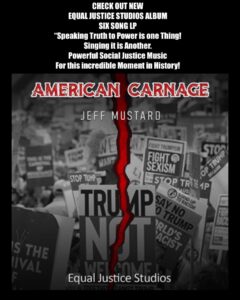